Arizonans Buzz Over Lights in Sky

PHOENIX (AP) - One night in March, Sue Krzyston heard her

husband call from outside: strange lights again in the sky. They

had occasionally seen odd lights before from their hilltop home in

north Phoenix, but these looked different.

``They were very bright, very large - amber or orange-colored,''

she said. ``They almost looked flamelike, although it wasn't the

And this night there was another difference: Mike Krzyston had

lights hovering above the city.

March 13. People from Tucson in the south to Kingman in

sightings to report lights, many saying they were in a boomerang

Radar screens showed nothing and officials dismissed the

But the issue won't go away quietly.

``You can't ignore that something happened. Something was out

She didn't see the lights, but enough people have called her

about them that she is convinced something happened, and she wants

And then the Arizona sightings hit the big time. USA Today ran a

story on the phenomenon last week and other major media outlets

followed. The Krzystons' videotape was played on national

Gov. Fife Symington even got into the fray, getting headlines

he'd ordered a state investigation of the sightings. He called a

news conference later to say it was all a joke, and dressed his

chief of staff as an alien for comic effect.

Even with the snickers, Barwood and others see the recent

attention as vindication and proof that the phenomenon is worthy of

Even if the phenomenon turns out to be manmade, Charles Painter

would like an answer. ``Somebody knows what it was,'' he said.

driving from Tucson to Phoenix.

``They have to test those periodically to make sure they don't

have any radar track,'' he said.

Painter saw lights in a triangle formation. While Sue Krzyston

Phoenix. He pulled off the highway to listen for jet engines but

spacecraft. But she said she and her husband had always attributed

previous sightings of odd lights to Luke Air Force Base, which sits

``This particular night they were farther to the east than

they'd ever been before,'' she said.

Peter Davenport, head of the National UFO Reporting Center, a

private organization based in Seattle, said his office received

hundreds of calls about that night. He said the reports were

remarkably consistent in terms of time, location and description.

``Without a doubt, I think the events over Arizona are the most

three years I've been director of the hot line in Seattle,'' he

the Air Force to investigate. McCain forwarded the letter to the

Air Force. There's been no reply.

Whatever the cause, Barwood said people deserve an answer.

``Why are so many people afraid of saying, `Hey, let's get to

the bottom of what happened?''' she said.

PHOENIX (AP) - Military flares - rather than UFOs - might be

behind those mysterious, bright lights that caused such a stir in

Visiting jets from the Maryland Air National Guard were using

high-intensity flares over a bombing range near Phoenix the night

of March 13, when many people reported seeing lights, military

The flares would have created quite a light show in southwestern

Arizona, where many people reported seeing the lights in a

boomerang formation. The lights, captured on videotape, created a

Capt. Drew Sullins, a spokesman for the Maryland Air National

Guard, said eight of its A-10 ground-attack jets were flying

The planes were dropping high-intensity flares from 15,000 feet

by parachute and illuminate a wide area.

Before returning to Davis-Monthan Air Force Base in Tucson that

night, the planes dumped all their remaining flares at high

altitude, which would have created what one pilot called ``one hell

of a light show,'' Sullins said.

But the flare explanation may not solve the mystery. It doesn't

explain sightings that came from northwestern Arizona - up to 200

And Frances Emma Barwood, the Phoenix city councilwoman who's

been pushing for the Air Force to investigate the lights, said the

explanation was just too convenient.

``If that is their explanation then they need to do a

Copyright 1997 The Associated Press. The information 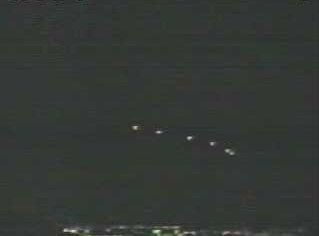 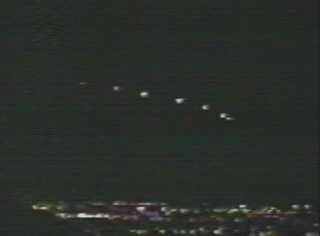