Spring-Heeled Jack first leapt out of the shadows in the late fall of 1837.

At first he was just a rumour, and few Londoners believed the tales they

heard of the bogey-man who was reputed to be be able to leap huge hedgerows,

and breathe flames from his mouth. Few believed the tales of the attacks,

mostly on young women, carried out by the mystery man. The rumours

persisted as the number of attacks grew. It seemed his modus opperandi was

travellers. Usually he would rip their clothes with the claws on his hands,

and breathe flames into the victims' faces. Then, with shock still

immobilizing his prey, he would bound away in huge, leaping strides which

covered great distances at each step. The thing about the devil-man which

most stuck out in the minds of the victims were his terrible, protruding,

hell-like eyes, and his peculiar ringing laughter, which echoed in their

try and track down the miscreant, and at one point the group included the

Duke of Wellington, and Admiral Codrington, the former of which set out on

Jack to justice. All to no avail. Spring-Heeled Jack continued his reign

of terror. His ability to leap over huge hedgerows and walls made him

extremely difficult to catch. He had also added the act of terrifying

coach-drivers to his list of conquests. The attacks reached a climax when,

in the winter of 1838, he moved his activities into the city proper.

The first of these London attacks took place on a dark February night. Lucy

lonely street in the Limehouse district. As they passed Green Dragon Alley,

a tall cloaked figure bounded out of the shadows at them. He spat blue

flames into Lucy's face, blinding her. As she lay writhing on the ground,

Spring-Heeled Jack calmly turned around and melted back into the shadows.

Panic spread over the city of London. Up until now, the man's activities

had been centred around the surrounding towns and villages along the Thames.

Word spread quickly: Spring-Heeled Jack was on the prowl in London itself!!

He struck again a few nights later. The Alsop family was spending a quiet

evening at home, when a violent knocking was heard at the front door. Jane

Alsop (who lived with her father and her two sisters) got up to answer it.

front gate. He swung around. "I'm a police officer," he said. "For God's

sake, bring me a light, for we have caught Spring-Heeled Jack in the lane!"

As Jane ran to fetch a candle, she thought how exciting it would be to see

Spring-Heeled Jack arrested. When she gave the candle to the man at the

gate, she realized she had made a terrible mistake, for the man applied to

himself! Jane screamed as he vomited forth a huge amount of flame from his

mouth. He then grabbed her and tore at her clothes with his sharp claws.

She tried to get away, but the man caught her and continued his attack.

Soon the whole family ran out into the street, hearing her screams, but

Spring-Heeled Jack bounded away down the road, and was soon lost to sight.

Jane described her inhuman attacker to the police, saying that he wore a

tight oilskin suit, and a kind of close-fitting helmet on his head (pictures

later at another house, but a servant boy realized who he was and began to

Throughout the 19th century, Spring-Heeled Jack was sighted all over

England. After a brief period of inactivity in the late 1830's he was seen 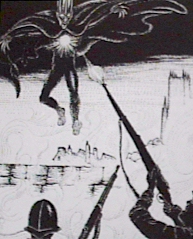 He frightened army sentries in the 1870's, by

darting out of the darkness and slapping their

faces with a cold, clammy hand before leaping

onto the roofs of their sentry boxes. Angry townspeople

laughed and melted away into the darkness,

Spring-Heeled Jack was last seen in 1904 in Liverpool.

There, he terrified people by bounding up and down the streets and onto their rooftops.

When attempts were made to corner him, but simply vanished into the darkness.

This was the last reported sighting of Spring-Heeled Jack.

more than one) was an Irish nobleman, The Marquis of Waterford, who was

renowned for his sadistic taste in practical jokes, and his scorn for women.

officer while travelling abroad. Haining believes that Waterford and his

rich friends thought up the idea as a prank to get even, by proxy, with the

police and women in general. Haining also believes that Waterford (who had

attacks. It is likely that he also learned the technique of the fire-eater

in order to heighten the supernatural aura of Spring-Heeled Jack. In

addition, Waterford had strangely protuberent eyes, which matched the

descriptions of Jack. He was also in the area when many of the attacks

occured. As a final piece of evidence, the servant boy who scared Jack away

saw a crest with the letter "W" on the man's cloak.

Although the mystery of Spring-Heeled Jack's identity has probably been

ascertained, it is far more entertaining and romantic to think of

leap from the shadows again.