WHY IS VENUS OFTEN MISTAKED FOR A UFO? 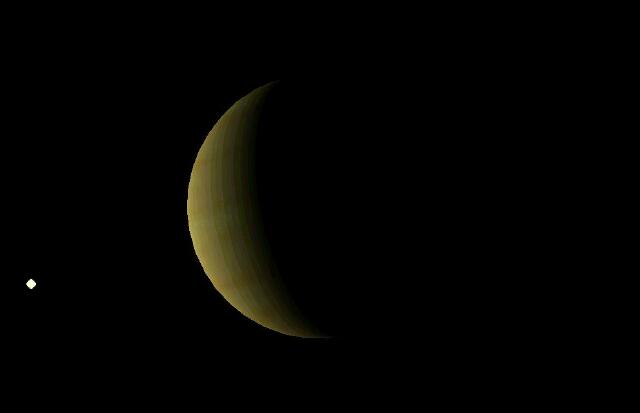 Venus is the brightest planet in our night sky, so bright that it is often visible during the day, too. Although it is 45 million kilometers away, many people reported sightings of UFOs when the Venus was up, they claimed UFO was hovering above the neighbourhood...
It even happened to me once.

It was the 27th of October, 1997. I was on my way home from school. At that time of the year, night here usually falls at about 5 - 6 p.m. It was about 6:30 when I got to my street. I live at the suburbs of my town so the streets are rather quiet and dark.
And then I saw very bright object in the western sky. It was surrounded by some sort of fog. It looked very distant and i thought it looks like a comet we saw few months ago. I didn't watch it for a long time.

Two years later I got a computer program 'Starry Night Pro 3.0' by Sienna Software. The program shows star and planet positions for any time, day or year in the past or in the future. So I set the date: October 27, 1997. And there it was Venus, shining above the western horizon. I haven't seen it before so I was very surprised by its brightness...

I believe the fog was caused by high altitude clouds.

Why is Venus so bright? Its atmosphere is almost 100% carbon-dioxide. It is very dense so its cloud reflect much more sunlight than any other planet in the Solar System.
In 1835, French battleship received orders from their command to knock-down enemy balloon. Later it was discovered that there was no enemy: they were trying to shoot Venus.
One evening in October 1969, at 19:15, former US president Jimmy Carter saw UFO suddenly appearing in the western sky, at approximately 30 degrees altitude. "It was brighter than sky and clear like a Moon. It changed size to a size of an ordinary planet to the size of a Moon. It was about 274 - 914 meters (300 - 1000 yards) away."
But, UFO skeptic Robert Sheaffer investigated the event and came up with conclusion that without any doubt, witness saw planet Venus.

One British expert for physics, R. V. Jones, once wrote an article...
"My contact with this object began about in 1925, when people from Oxted, Surrey (England) told me about a strong light that moves slowly across the sky every night. Actually, I knew a married couple who was up all night just to observe it. It was Venus which attracted them with its brightness; they have never noticed that stars and planets move across the sky as Earth rotates. Venus really caused a lot of problems. In 1940 or 1941 we had alert status because of reports that Germans have a new plane which flies on a very high altitude. The report came from one defense batterry from Borders. The plane was bright and they used their instruments to determine how high does it fly. The answer was 26 000 feet and we were wondering how did they measure it so accurately. Investigation determined that 26 000 feet was the last mark on their instrument and their target was again Venus. Same explanation is for few flying saucers that appeared in the Northern Scotland. Sometimes we were able to predict when the UFO sightings will be reported, depending on Venus' position in the sky."

In autumn 2000, my friend told me that he observes UFO every night. He said that first he sees a very bright star, but that star slowly comes lower and lower. When it gets low enough, it flashes in rainbow colors. I turned on my computer and checked it with the Starry Night Pro; the time of his sighting perfectly matched with positions of Venus. What about the rainbow colors?
When a star or a planet is low in the sky, its light must pass through more atmosphere than usual. The atmosphere converts light, and that is why the Sun gets red when it rises or sets. And that is why brighter planets and stars (like Venus, Jupiter, Mars or Sirius) change colors when they are low in the sky.

There are probably more UFO/Venus sightings that are not even reported. That mostly happens because people do not posess basic astronomical knowledge. Can it be so hard just to look at the sky map?... 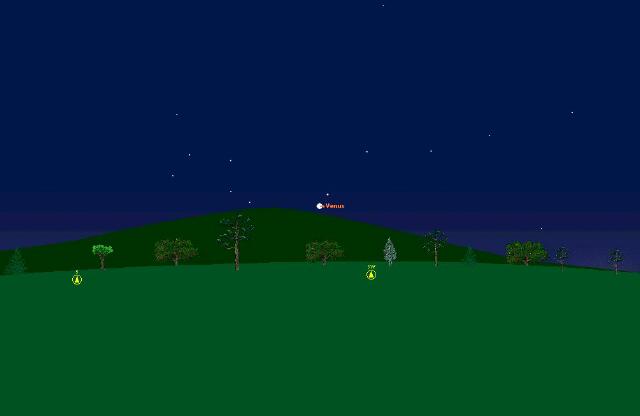 Back to The Shadowlands